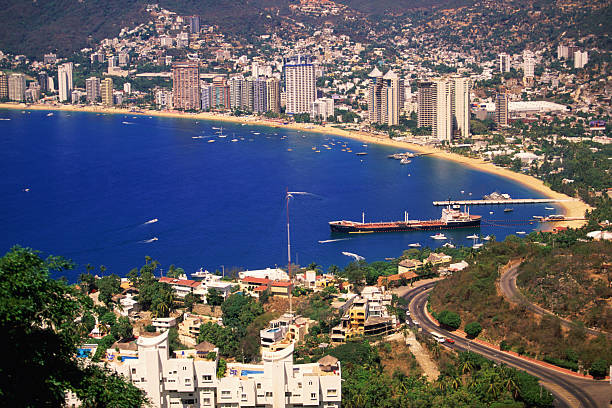 This city offers an informal and relaxed atmosphere. It has one of the most impressive views of the bay that any coastal resort has to offer.

Acapulco is an important symbol of tourism in Mexico, being the first sun and beach destination to gain enormous popularity worldwide.

In the 1950s, it was the holiday haven for parties and weddings of huge Hollywood personalities and British royalty who escaped levels and palaces to come and enjoy the stunning beauty of the region.

Years later, and the significant increase in tourists, Acapulco was divided into three main tourist attractions: Traditional, Golden and Diamond. All of them have their own beauties that deserve more than one visit to discover them all.

How to get to Acapulco

There are 3 ways to get to Acapulco, it can be by Plane, Bus or by car. Whatever your ideal way to get to this beautiful city, we will tell you how to achieve it and for your comfort.

Acapulco is generally divided into three main zones, the traditional zone (the oldest zone in Acapulco), the golden zone, and the diamond zone, and is divided into a number of smaller neighborhoods. Also worth visiting is the Acapulco suburb of Pie de la Cuesta, which has several restaurants that overlook the seafront promenade and offer good views.

¿To do in Acapulco Mexico?

Acapulco is and will continue to be a special beach destination in Mexico. Its white sand beaches and good weather throughout the year make it a suitable space to relax and rest, but if you like to do something new or unusual in Acapulco, what are your alternatives? Here we tell you.

¿Where to go in Acapulco Mexico?

Its sandy beaches and good weather make it understandable that tourists flock here year after year, but if you feel like doing something different or out of the ordinary in Acapulco, keep reading and we will tell you about your options to visit.

Along with Acapulco’s nightlife, the best beaches in Acapulco are one of the most popular attractions in this Mexican resort town. Some general tips for spending the day at the beach in Mexico are:

The guide to the best clubs in Acapulco contains a brief overview of the most popular clubs in Acapulco, along with some suggestions. Every taxi driver should be with all these nightclubs by name, so when you visit us in Acapulco you can ask a taxi driver his location and he can take you without problems. We will eventually add a map where you can locate them.

There is also a new public transportation system known as Acabus. It is efficient, safe, comfortable and fast.

It connects the many attractions and tourist facilities of the complex. The main central axis is 16 km (10 mi) long.

Route with 18 stops along the way and transports almost 130 thousand passengers daily.

The name Acapulco comes from ancient Nahuatl expressions that mean “place of colossal reeds”. Archaeological finds detail that when the Spanish discovered Acapulco Bay in 1512, the multitude had already lived in the region for some 2,000 years.

The Spanish, eager to find a trade route to Asia, built a port and shipbuilding facility at Acapulco, using its naturally protected deep-water port.

In 1565, Fray Andrés de Urdaneta found the Pacific trade winds that allowed ships to reach the East safely and lightly. For well over 250 years, the naos, or Spanish trading galleons, have made the annual voyage from Acapulco to the Philippines.

The gold, silks, and spices were unloaded at Acapulco, carried overland to Veracruz, and then onto ships waiting for the transatlantic voyage to Spain.

Until then, Dutch and English privateers such as Sir Francis Drake were busy looting ships of their prized cargo. To secure their investment, the Spanish built Fort San Diego. But it was the Mexican War of Independence (1810-1822), not pirates, that abruptly killed the trade route.

Over the next century, Acapulco declined and was subjectively isolated from the rest of the world until a paved highway linked it with the Town of Mexico in 1927.

Affluent Mexicans have begun vacationing here, Hollywood arrived, and by the 1950s, Acapulco was becoming a swanky jet-setting resort.

But by the 1970s, overdevelopment and overcrowding had taken their toll and the bay became contaminated with raw sewage. Foreign tourists took their money to the new resorts in Cancun and Ixtapa.

Again, the Acapulco boom is over.

The huge occasion was caused in 2002, when American college students, called for cheap rooms and a welcoming hotel industry, have begun to flock to Acapulco, replacing Cancun as Mexico’s top spring break hotspot.

Today, Acapulco is experiencing something of a renaissance, capitalizing on luxury resorts, condominiums, spas, boutique hotels and dining venues to cater to a more unique clientele with the promise of reclaiming its title as the ‘Pearl of the Pacific’.

Give a touch of adrenaline to your vacations, here we ...
Leer Más
Jet Ski Acapulco

The most recommended places to observe the rich biodiversity of ...
Leer Más
Aviso de privacidad